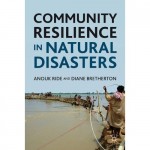 “If you face a natural disaster, you will most likely turn to your neighbors and your community for help, advice and to help others you see as suffering more than yourself. This is a natural response to survive, to cope psychologically and to rebuild communities. This behavior is far more common than generally assumed by the authorities and media commentators which predict crime, competition and opportunism,” said Dr Diane Bretherton.

The research is featured in a new book, “Community Resilience in Natural Disasters” (Buy “Community Resilience in Natural Disasters” at 20% discount) in which Bretherton and Ride compared interviews in six countries around the world to find out what communities did when faced with a natural disaster and how their behavior changed with the arrival of assistance from aid agencies, government and other organizations.

“We found everywhere community resilience is the usual story and communities tearing themselves apart is the unusual story,” said Anouk Ride. “But the problem is aid agencies, authorities and others who seek to help disaster survivors often take over and disempower local people, actually hurting the very resilience that helped people survive and cope with the disaster in the first place and creating conflict in communities.”

Interviews with survivors of earthquakes in Mexico and Pakistan, tsunamis in Indonesia and Solomon Islands, drought in Kenya, cyclone in Myanmar and the US’s Hurricane Katrina, inform Bretherton and Ride’s conclusions which they say should be instructive for aid agencies, government and the media.

The research was discussed at the American Psychological Association (APA) Convention, attended by around 12,000 psychologists which this year is being held in Washington DC, 4-7 August.

Dr Diane Bretherton is a renowned psychologist presented with an award (the Morton Deutsch Conflict Resolution Award) by the APA for outstanding contribution to the field and Anouk Ride is a  Phd candidate, researcher and author of many articles and books on social issues.