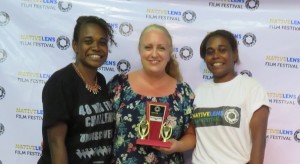 At the inaugural Native Lens Film Festival in Honiara, a team of local    and international judges awarded the film “Herstory: Women working in corrections” coproduced by the Correctional Services  Solomon Islands (CSSI) Women’s Network and Sukwadi Media the  award for Best Feature Film 2019. Herstory is a participatory  documentary film that tells the stories of pioneering women who were  the first to work in prisons in Solomon Islands. These women tell their  personal stories of achievement and how they collectively fought for  women’s rights in a once male-dominated workplace.

Dr Anouk Ride, co-producer initially accepted the award on behalf of the film-making team then, at a ceremony yesterday, this award was formerly handed over by co-producer Wendy Gebe to the CSSI Commissioner.